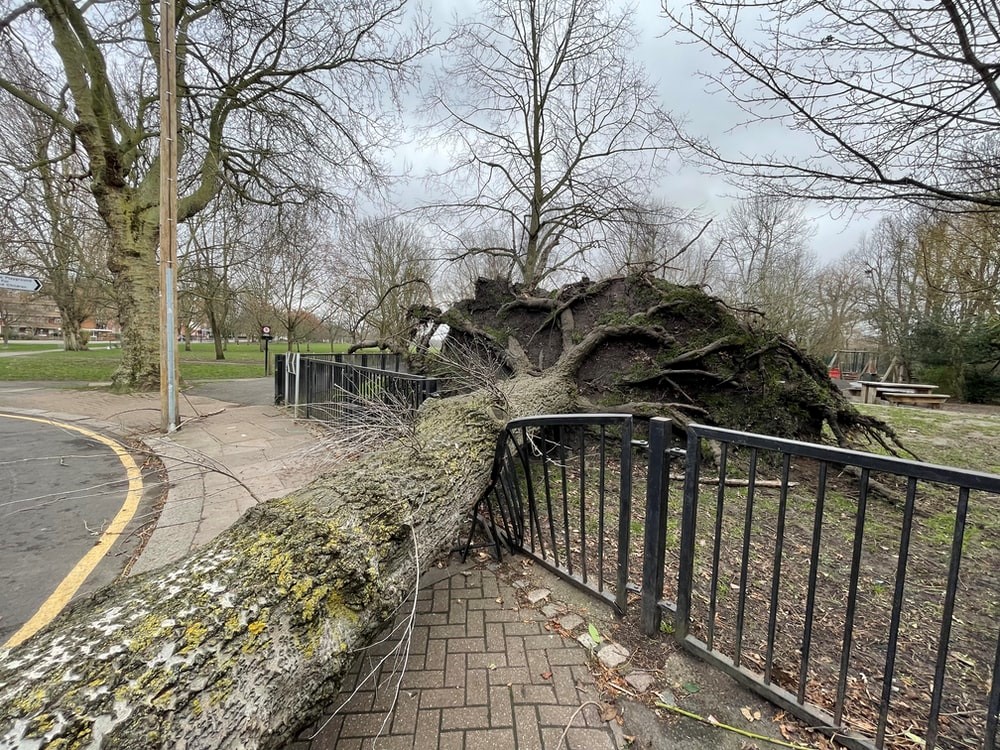 Much as MetSwift anticipated, 16th-21st Feb 2022 served up a ‘three course meal’ of stormy weather to the UK.

On the afternoon of Wed 16th Feb, Storm Dudley arrived, hitting northern UK hardest. Wind gusts mainly peaked in the 50s to 60s mph inland, and 60s to70s mph along western coasts. Some mostly minor disruption was reported, along with the displacement of many trampolines, one of which struck a train just outside of Cardiff station, leading to a two-hour wait for clearance and checks.

Well in advance, it was clear that Storm Eunice would not only bring stronger winds, but strike central and southern parts of the UK, where such high speeds are seldom seen. MetSwift highlighted the potential on Tue 15th, and then on Thu 17th the Met Office issued a rare red warning (‘stay at home’) for parts of the West Country, before adding another one for Southeast England in the early hours of 18th.

Even inland, gusts widely reached the 70s mph, locally more than 80 mph. Many places recorded the highest speeds since 2000, and others since the Burns Day storm of 1990. Meanwhile, funnelling of winds between the Isle of Wight and the mainland led to a 122 mph gust at the Needles Old Battery, a new UK record high.

After such a hefty main, few fancied another course, but the weather served it regardless. Shortly after being named, Storm Franklin made its presence felt Sunday through Monday 21st.

Peak winds were generally on par with Storm Dudley but reached 10-20 mph higher for much of Northern Ireland and western coasts of mainland UK. They also reached around 10mph higher for some inland locations further south and east. This occurred on Sunday in association with a ‘squall line’: A narrow band of very heavy rainfall, along which the wind races with increased urgency. Such ‘straight line’ wind gusts are typically sudden, brief, but powerful.

In the north, Storm Franklin has hit harder than Storm Eunice (from which they were spared the worst). Stronger winds have combined with heavy rainfall to cause disruption to travel via downed trees and flooding incidents.

This trio of storms has clearly demonstrated that while the UK and Ireland have a small land area on the global scale, it’s still large enough for storm impacts to vary a great deal across it. This is also true of climatology – the ‘normal range’. For example, an ‘extreme wind gust’ is arguably around 70 mph or higher in London, but in Glasgow, you’re likely talking at least 80 mph.

Significant local variability also showed its hand. For example, within the red Met Office warning areas, most places experienced substantial disruption and damage, but some sheltered spots escaped with relatively little trouble. Even shallow hills and valleys can have an appreciable effect like this.

Being intended for general, rather than specific customer use, the Met Office warnings can't account for such details - the result would be very complicated, making it difficult to interpret for many. In any case, it can be dangerous to be so specific with such details, for they can change considerably with even a slight deviation in wind direction from expectation.

Bottom line is, warnings are there to tell you that the risk of dangerous weather is (much) higher than usual. If not a lot actually happens in your locality, that doesn't mean the warning wasn't valid. Often, the broader scale will tell a different story - as was the case with Storm Eunice.