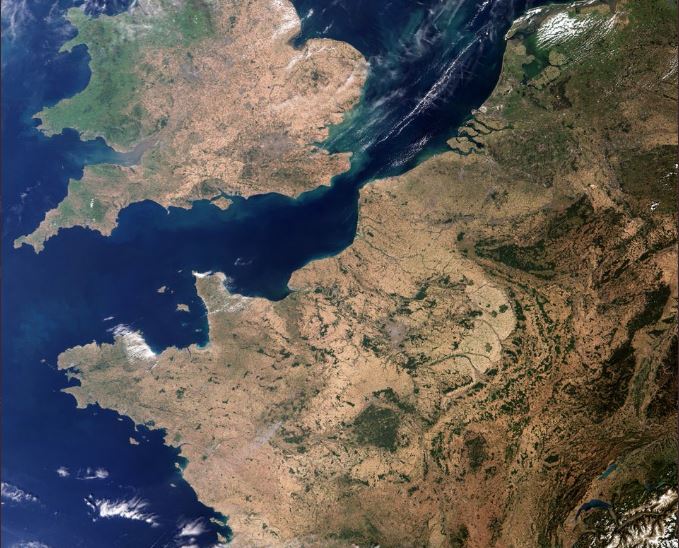 I’m writing this during the hottest, sunniest August week in England & Wales since at least 2003. The still strong sunshine is beating down on widely parched lands, which are contributing to high daytime temperatures (more on that later). Many waterways are running very low, and vegetation is under severe drought stress (see below).

In my local area of southern England, green fields of grass have been absent since June. All vegetation is parched, and the classic warm season scents of lush plant life have been replaced by ones reminiscent of the Mediterranean.

These sorts of conditions extend well beyond the UK, across large parts of mainland Europe. France has been hit particularly hard, with for example sections of the La Loire river reduced to a trickle.

How did we get into this situation? That’s the tale that I’m here to tell – and trust me, it’s not a tall one!

During the opening two months of the summer, weather patterns were far from typical. In the chart below, the blue stippling indicates that the Jun-Jul 2022 mean sea-level pressure was in the lowest third of the historical range (1950-present) across a region spanning Iceland to the Barents Sea.

Meanwhile, mean SLP has been unusually high over the UK and central belt of mainland Europe.

This combination signifies that the typical path of Atlantic low pressure systems, which bring wet and sometimes windy weather, has been well to the north of usual.

When that’s the case, high pressure systems frequently extend eastward from the Azores, bringing a lot of dry and very warm or hot weather.

Just how hot usually depends on what goes on over Iberia (south-western Europe). If high pressure locates north of there, there can be build-ups of very hot air which are periodically released north or north-eastward. That’s exactly what happened in mid-July, producing record-breaking high temperatures in several countries, with England and Germany breaching the 40°C mark for the first time on record.

Such extraordinary weather was made possible by a combination of climate warming and a feedback cycle of low rainfall and high temperatures during the preceding weeks, following widespread rainfall shortages last winter and spring.

As shown below, precipitation (snow, rain, hail etc.) during Jan-May 2022 was predominantly below normal in both the northwest and southeast of Europe. The situation has since been similar so far this summer, but with southern Iberia joining in.

This persistence of regional rainfall deficits across more than half a year amounts to some enormous shortfalls of input to water storage, both in large bodies (e.g. aquifers and reservoirs) and more generally in soils. Many areas are missing around half the long-term average, some places even more.

In some regions, late 2021 was also abnormally dry. For example, some far-southern locations in England recorded their driest November on record.

Alongside the direct environmental effects – e.g. soils turning to dust, crops struggling, and general wilting of wild plants – there is a significant impact on temperatures.

Drier soil changes temperature more quickly. The reason being, water has a far higher specific heat capacity than air, which means it takes much more (about 4 x in fact) energy to change its temperature by a certain amount.

It follows that the less water there is within a given amount of soil, the more quickly it will heat up in response to sunlight. So, drier soils lead to higher temperature maximums.  That also means higher daytime rates of moisture loss to evaporation.

In summer, with the days much longer than the nights, lower overnight minimum temperatures can’t restore the balance. So, a runaway cycle ensues, which can only be stopped by a substantial spell of wet weather (occasional showers don’t cut it).

Across much of Europe, this cycle has contributed to not just record-high temperatures, but a very warm Jun-Jul 2022 overall. As you can see below, temperatures have been impressively high in western and central parts even by very recent standards.

Changes Are Coming – But Will They Last?

At the time of writing, global weather forecasting models are predicting that cooler, wetter weather will advance across western Europe during the week of 15th. It’s uncertain how quickly this occurs, but the transition should be complete by the weekend of 20th August.

This is in keeping with the typical trend for this time of year. During late summer and autumn, typical temperatures drop, and rainfall amounts increase, especially in northern Europe.

But the weather doesn’t always play ball. Certain patterns slow or even temporarily reverse the cooldown. Some bring largely dry conditions for weeks on end. A fair few Septembers past have been very dry and nearly as hot as a typical summer month. Even November has been known to bring very little rainfall, as proven only last year when many areas around the English Channel recorded less than 5 mm.

How likely are such patterns this year? Let’s take a quick look.

MetSwift’s Advanced Statistical model identifies analogous historical years by comparing the recent behaviour of large-scale driving forces behind weather patterns with that of years longer ago.

This approach can provide useful guidance on how the weather will behave during the weeks and months ahead.

Predictions for autumn 2022 in Europe are shown below.

Broadly, it is suggested that parts of western Europe will be drier than usual with near normal temperatures, while central-eastern parts will be cooler and wetter than average.

Importantly, there’s no suggestion of above normal rainfall in some of the most severely parched regions such as southern UK and much of France.

Alarmingly, long-range forecast models from other organisations are painting an even drier picture.

The probabilistic ECMWF prediction suggests autumn is most likely to be drier than usual across much of western Europe, including southern UK. This is associated with an unusual frequency and persistence of high pressure systems across the region, akin to what we’ve seen this summer. CFSv2 predicts a 700 hPa geopotential height anomaly pattern that corresponds to the same thing. This is not good news for the drought-stricken lands.

ECMWF also hints that the following winter could be drier than usual across western and central Europe. At this very long lead time, signals inevitably weaken, so it’s worrying that this pattern is at all evident.

However, the outlook from CFSv2 is more hopeful for these regions, predicting a winter pattern that corresponds to near average rainfall.

If autumn proves to be drier than usual widely, an at least average winter for precipitation will be desperately needed to restore water reserves before the inevitable big springtime increase in evaporation and uptake by plants.

Personally, I usually despise long runs of unusually wet weather at any time of year, but for the time being I’m willing to make an exception!

Featured image is part of a Copernicus satellite image taken of Europe on 10/08/2022.