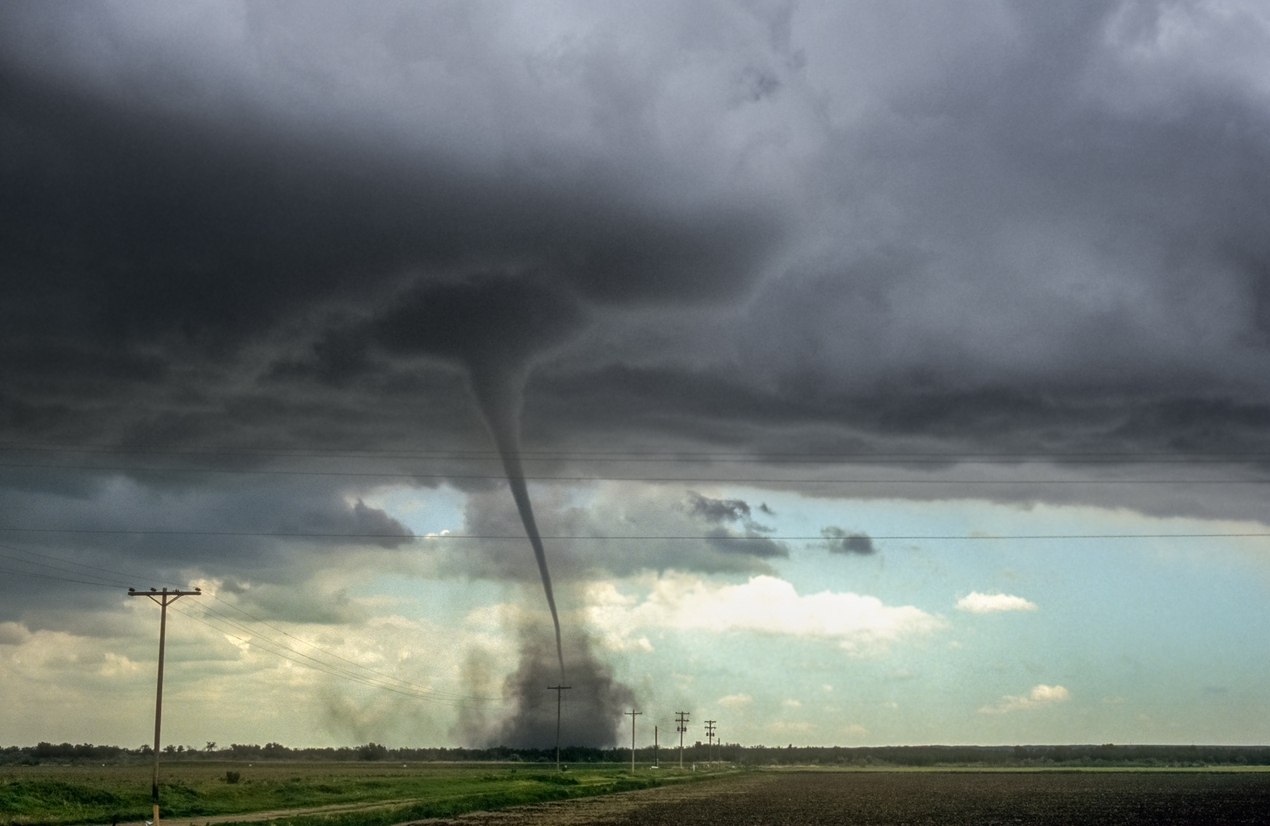 Early each year, Americans across large parts of the USA brace themselves for a reliable threat: tornadoes. According to official records held by the National Oceanic and Atmosphere Administration (NOAA),tornadoes have been responsible for the following yearly averages during2000-2018 (1960-1999):

Reports were not so reliable in the earlier years but even so, we can see that improvements to warning systems have reduced the typical number of injuries by about a third when compared to 1960-1999.

Fatalities have stayed about the same though and even accounting for reporting reliability, that’s alarming. It’s testament to the tendency for tornadoes to develop suddenly and move erratically.

Of all weather types, tornadoes may well have the highest capacity to cause injury or death relative to frequency and scale (bearing in mind earthquakes are geology, not weather).

These violent vortexes have a distinct ‘peak season’ in which they occur most often.

For the contiguous US generally, this spans March-April, but it tends to extend through July in the Midwest region.

Looking to the Ocean for Guidance

Of the large-scale phenomena that significantly influence day-to-day weather patterns (known as teleconnections), among the most persistent are sea surface temperature (SST) patterns. Which is to say, they tend to change slowly. This gives them high value when looking for guidance on weather patterns in the coming weeks and months.

There are several key regions of our planet within which SST patterns greatly affect weather patterns far and wide. The most well-known of these is the ‘El Niño Southern Oscillation’ (ENSO) region, which spans much of the tropical Pacific Ocean.

Currently, most of the region is dominated by colder than average SSTs. This is known as a La Niña event, and it’s currently at weak to moderate magnitude (SST anomalies mainly in the range of -0.5°Cto -1.5°C). Based on all available guidance, this La Niña looks very likely to continue through spring 2022

Starting with the Tropical Pacific

By seeing how tornado seasons have tended to behave during La Niña years in comparison to all years since 1950, we can start to get a sense of what could transpire in 2022. The maps below show the resulting risk of at least one EF0 or stronger tornado in the month of April and how that compares to the long-term average:

Due to the hit-and-miss, highly localised natured of tornadoes, to extract a signal from these maps we must look for areas where the risk is predominantly increased or reduced.

For example, we can see distinct clusters of raised risk in southern Nebraska, western Texas, and south-eastern Michigan.

For analogue-driven predictions, MetSwift takes this manner of filtering much further, considering the influence of numerous other large-scale atmospheric and oceanic cycles.

The resulting analogous years and months along with key tornado events are listed below. I’ve colour-coded them from very quiet (dark teal) to near average (grey) to active (gold).

These suggest that quiet or very quiet is most likely in April, yet least likely for May. Then, a near or below average June is favoured. What really stands out to me is the potential for two of the three months to be very inactive. We could well see a ‘sandwich’ of quiet bread around a busy filling.  Yes, you just read that.

Next, the maps are brought back into play, so we can study how the distribution changes. To avoid an unhelpfully small (and unreliable)sample size, the analogues years are given more weighting compared to the rest, as opposed to dropping all the other data.

Please note that the data is processed on a 0.1 degree resolution, which means that they show the probability of a tornado within approx. 11 km of a location.

The quiet or very quiet signal established earlier is very evident on the second of these maps. Importantly, we can now see that the below normal activity is focused in an area between central-northern Texas, central Illinois, and northern Alabama.

These areas are where tornadoes tend to be most prevalent during April, so a quiet month here strongly skews the overall tornado count downward.

Where tornadoes are usually scarcer, there is instead suggested to above normal activity. Two standout regions are the central US and near the eastern Great Lakes.

The pattern is generally less coherent for this month, but some distinct signals remain.

Within ‘tornado alley’ – the swathe of the central US that tends to see the most frequent and powerful tornadoes –there’s an overall eastward shift to the zone of highest risk. It appears it could be a challenging month for central and eastern Oklahoma, Kansas, and Nebraska, along with south-western Iowa, north-western Missouri, and much of Wisconsin.

In the eastern US, the analogues suggest that below normal activity will predominate.

A higher than average risk is also suggested along much oft he Gulf of Mexico and Atlantic coasts.

However, confidence in predictions for this month is low, for there is only one contributing historical year. The finalised data for 2021 has yet to be released, leaving us with only 2001 for the spatial risk assessment.

A Reminder About Risk

If you’re in one of the areas of raised tornado risk on those maps, it means there’s a higher than usual chance of a tornado impact within 11 km of your location. Even the highest risk locations are at less than 10%, so that still implies that a decade can pass without a single tornado.

Wherever you live, I hope this proves to be one of the many tornado-free years.