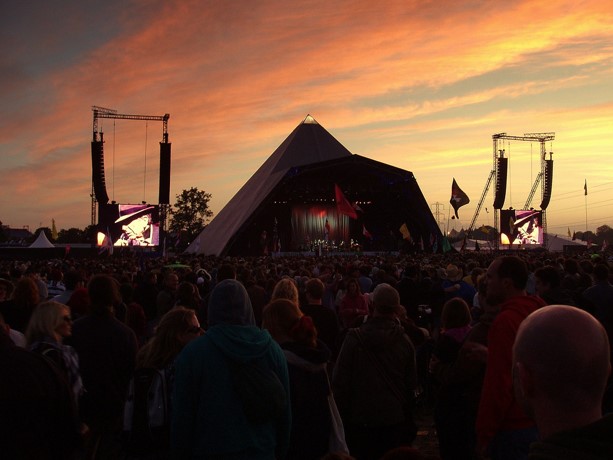 The Northern Hemisphere festival season is upon us once again. Of the music and performing arts festivals, few can compete with the grandeur of Glastonbury 2022. It is, after all, the largest greenfield one… in the world.

While renowned for the Pyramid Stage, top-tier performances, and embracing the hippy lifestyle, it’s also well known for tempestuous weather, with an associated abundance of mud and wellies.

Yet some years have delivered much the opposite. In fact, following the first Glastonbury Festival in 1970, it would be a dozen years before the first ‘mud bath’. The 1982 event opened with torrential rainfall and remained stormy through to the end. The Friday saw the wettest single day in 45 years!

By contrast, one of the hottest Glastonbury’s on record took place just two years later. The preceding Wednesday reached 27.5°C, about as high as ever recorded at that time of year.

1989 was another toasty one, reaching 27.3°C on the Sunday, but the very next year was soaking wet on the Friday, making for a very mucky event despite far drier weekend weather.

Seriously soggy and/or mucky events were also experienced in 1997 (‘The Year of the Mud’), 1998, 2005 (opening day thunderstorms setting a Glastonbury record with almost a month’s rain in just a few hours!), and 2007. After 2005 put some areas under nearly 4 feet of water, a flood defence system was installed, which proved invaluable in 2007.

A very dry and sunny festival was finally seen again in 2010. Temperatures reached as high as 26.4°C.

2014 saw the return of thunderstorms, this time on the Friday, which temporarily shut down the festival due to high lightning activity.

Clearly, it’s going to be a challenge anticipating how Glastonbury 2022 will shape up more than a week in advance – but we’re here to give it a good go!

Using knowledge of large-scale phenomena which have a proven influence on regional weather patterns, MetSwift have identified a set of historical years that should be most relevant for what happens in the coming weeks and months.

These ‘analogue years’ underpin our Advanced Statistical model. We’ve asked it how warm and wet Glastonbury 2022 is likely to be and the results are presented below.

It suggests that temperatures will most likely be near or a bit above normal for late June, which for the rural site of Glastonbury translates to daytime highs of 19-22°C and overnight lows of 8-12°C.

Such daytime highs can be ‘about right’ when you’re stood within a vast crowd of tightly packed individuals. Temperatures among the masses can rise considerably above those of the wider atmosphere.

Rainfall is suggested to be above average. Not the best of news given the propensity for the fields to turn to muck even after a modest amount!

The lack of below normal temperatures indicates a showery setup rather than long spells of rain. That may seem like good news at face value, but in summer there’s a catch: An increased risk of torrential rainfall and thunderstorms.

Perhaps, then, an interrupted festival this year? Let’s have a quick look at what a couple of other top-tier weather prediction models are suggesting.

Extended NWP Models Say:
Temperatures Near or Below Normal with Typical Rainfall

The predictions shown below are from two of the best performing numerical weather prediction (NWP) models currently available to the public.

The top two charts are from the European Centre for Medium Range Weather Forecasting (ECMWF)’s NWP model. They suggest nothing out of the ordinary for the time of year. So, daytime highs of 19-20°C and overnight lows of 9-10°C, with a good chance of mainly dry weather (i.e. dry on more days than not).

The bottom two are from the Climate Forecast System (CFS). Below normal temperatures are predicted, something like 16-18°C daytime highs and 7-8°C overnight lows. That would be a bit testing in typical summer clothing during the evenings, nights, and mornings - even in a big crowd.

Curiously, it also predicts rainfall to be near average. Such is possible if you have a run of cloudy, benign weather.

Considering all the above, the safest bet looks to be near normal temperatures with near or above normal rainfall. This might not sound like much of a prediction, but it does tell us that certain extremes are unlikely. There’s little sign of it being exceptionally hot, bone dry, or very wet.

Given the changeable propensity to the UK’s weather, it will take some serious luck to avoid rainfall during the entire festival. I’m sure most festival regulars will attest to that! So, some wet weather gear is advisable – at least ‘shower-proof’ but ideally more than that, just in case.

Here’s hoping for a Glastonbury Festival with nothing more than a few light showers to contend with. It can happen, honest!
‍