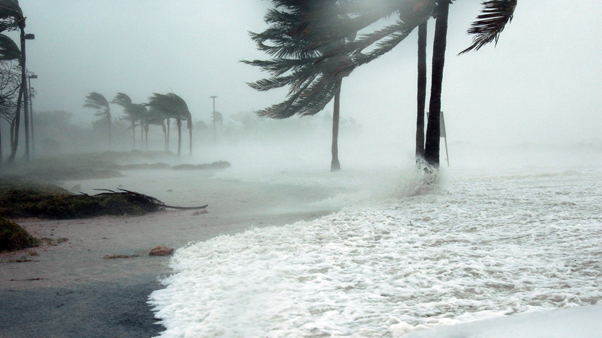 With NACA 2022 fast approaching, here’s a quick look at Florida’s familiarity with wild weather during the month of May. We’re talking tropical cyclones, tornadoes, and thunderstorms – all of which have the potential to interfere with proceedings. Is it likely to be a rough ride, or smooth sailing? Read on to find out!

Negligible Risk of a Tropical Storm or Hurricane

During the week of the year that NACA 2022 will take place, there’s never been a direct tropical storm, let alone hurricane impact on Miami (see below-left). This is also true of the following few weeks. In fact, we must look to 22nd-28th May for any direct impacts on Florida as a whole!

The earliest in the year that a tropical storm has been reliably recorded to hit Miami was on June 11th… all the way back in 1892. For the earliest in year hurricane impact, you’re looking at June 17th, 1906. Again, more than 100 years ago!

Clearly, the statistical probability of either of a tropical storm or hurricane hitting NACA 2022 is miniscule. Technically, it’s zero, but the thing about weather is, unprecedented events do happen. It’s certainly feasible that suitable conditions could arise record-early, but it’s an extremely unlikely scenario.

Could There be a Tragic Twist?

Having all but dismissed the tropical cyclone threat, our attention now turns to another wild weather phenomenon: tornadoes.

For Florida in general, our advanced NatCat model predicts a near normal risk of a tornado during the week centred on NACA 2022. However, this isn’t a cause for much concern:

Evidently, Miami has yet to be hit by a tornado at this time of year - but because tornadoes are very ‘hit-and-miss’, it’s prudent to consider the risk in the vicinity, rather than just on the spot.

Yet even doing this, the determined risk is very small: At most 0.25%. That means that for any single day, a tornado hitting Miami in mid-May has a return period of approximately 400 years!

Of course, this risk accumulates when considering whether a tornado hits on 10th, 11th, or 12th, so we have a 0.75% risk of at least one tornado hitting NACA 2022. That’s a return period of about 133 years. So, I daresay attendees will be extremely unlucky to find themselves contending with a tornadic tragedy!

The closest recorded direct tornado hit on Miami, time of year wise, was on June 8th, 1966. It was a minimal event, rated 0 on the Fujita Scale.

What About a Plain Old Thunderstorm?

For Floridians, thunderstorms don’t tend to be much to remark on. Reason being, they happen very often for a substantial part of the year. In fact, they even tend to follow a daily cycle, developing in response to surface heating during sunny mornings. That provides uplift while also giving rise to breezes off the sea, which can collide over central parts of the state with thunderous results.

Although the event is being held indoors, it’s worth considering the thunderstorm threat, in case of disruption to travel to and from the event.

Our Advanced Statistical model predicts a higher than usual thunderstorm risk for 8th-15th May 2022. It suggests a 1 in 4 chance of a thunderstorm occurring each day.

For a three day event, that means NACA will be lucky to avoid interruption the whole way through, so it’s a good thing people will be indoors most of the time!

That’s enough to potentially cause some travel disruption, depending on how well drainage systems cope. Of course, the local infrastructure should be well adapted to sudden downpours, given the climate.

Most of the time, there should be an abundance of clear, very warm or hot weather to experience. They don’t call Florida the ‘sunshine state’ for nothing!

Among those soaking in the atmosphere will be our Founder & CEO James Banasik at NACA 2022 – be sure to look out for him for even more weather insights.